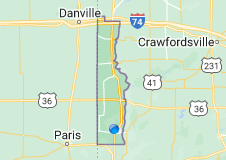 The Mound-Builders were the first occupants of the land that is now called Vermillion County. They were a peaceful group of people who left their mark on history by the still remaining mounds located throughout the county. The largest and most referenced mound in history books is the one located in the bottom grounds of Brouilletts Creek southwest of Hazel Bluff. This mound is approximately 300 feet long, 20 feet wide, and is 12 1/2 feet high. It is estimated that some of the artifacts that have been excavated are well over one thousand years old.

Through the years Native American’s led a passive and sort of nomadic life style. They were known to live in different areas according to the seasons. Deer and Buffalo hide covered their wigwams in the winter while tree bark would be their choice of cover during the summer months. They called the present day Wabash River Wahbahshikka. The French version is Ouabache. This is also why we are known as the Wabash Valley. They also referred to this area as red earth or vermilion due to the rich red mineral deposits that were found in and around the local rivers and creeks. The native’s would use the red pigment for coloring.

Eventually the white man, largely of French decent, came in droves. What started out as a peaceful relationship later turned to battles and wars among the many different Native American tribes. The native’s did not want to give up any more of their land that bordered the Wabash River. In 1809 the Treaty of Fort Wayne was signed. This treaty formed the Harrison Boundary line (named after General William Henry Harrison) and is also known as the Ten O’clock Line. This imaginary line runs through the central part of present day Vermillion County from the state line in the northwest to Jackson County in the southeast. Legend has it that the Miami Chief Little Turtle did not trust the white man’s surveying equipment and would only accept a line created by the shadow of a spear thrown onto the ground at ten o’clock in the morning. This line has caused havoc among surveyors and mappers. The jog in State Road 71 north of Dana was caused by an error from surveying in opposite directions to the boundary line.
Indiana joined the Union in 1816. A few years later in 1823, the legislature created an act where Parke County was to be divided by the Wabash River. The land to the west of the river was to be the creation of a new county. In 1824, Vermillion County came to life. It was named after the two rivers in the northern part of the region; the Big Vermillion and Little Vermillion. It was also decided to add a second l to the spelling so as to reflect the French influence from earlier times. As time went on, the other three borders of the county came to be Illinois to the west, Warren County to the north and Vigo County to the south.

The county is currently 37 miles long and 7 miles wide at its widest point. Vermillion County was originally made up of 4 separate townships:  Clinton, Helt, Vermillion and Highland. Years later, Eugene Township was brought into the fold. Newport’s central location within the county along with access to a large spring, grist mill and saw mill made it the obvious choice for the county seat. There has only been one capital punishment in Vermillion County. Walter Watson was executed on April 3, 1879 for the murder of Ezra Compton over a $.25 bar of soap. He was hanged at the old Newport jail. He was interred in Helt’s Prairie Cemetery.

Vermillion County may be small in size but very rich in history.

To contact a member of our team, please email vermillioncountyindiana@gmail.com